On sale in stores on 16 September

A Partita for chamber orchestra with references to Bach and Schütz, a symphony for string orchestra and timpani that is full of abrupt rhythms, and a peculiarly dark, romantic Chaconne for violin and piano: these three fundamentally different works from the first half of the 20th century represent the expressive spectrum and compositional signature of their creator. The musical language of Kurt Albrecht (1895 – 1971) was influenced by classical modernism, but at the same time, it was deeply rooted in European musical tradition. The oeuvre of the pianist, organ virtuoso, conductor, and teacher can no longer be fully determined today; numerous manuscripts fell victim to a bombing raid in World War II; only a fraction of the surviving works have been published in print.

Rediscovering unknown treasures and bringing remote repertoire back to the concert stages, or even premiering it, is an artistic concern of the violinist Gustav Frielinghaus, the principal violinist of the renowned Amaryllis Quartet. On his initiative, the pianist Jaan Ots and the Hamburg Camerata have recorded the three works with him for the present CD.

Buy now in the shop 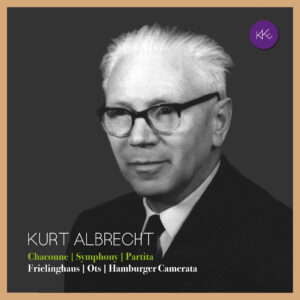